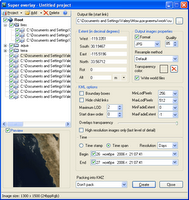 Open dialogue Selection files. You can add KML or KMZ files for the selection of the area of interests (AOI). You can use points, lines and polygons. All results of the work of program will relate only to the selected region.

Add Folder (Ctrl+F)
You can add folder into project tree. Superoverlay supports one level of folders only. Folders need for group operations with images. If we set the parameter for Folder that this parameter automatically will be set for all elements of group. We can set parameters to Project (all objects) also.


Extent...
Alt (optional) specifies a altitude of the overlay. You can select units of altitude from list (m, km, ft, mi). We use new overlays feature of GE 4.
Overlay transparency
You can set transparency of all tiled overlays.
High resolution images only
If you check this option then results include hi-res images only.

I begin to place in this blog my best publications.
Argos began to support KML format.

This post about Argos tools and results of birds movement.
Information about the authors and the references is given in the layers of the kml-maps or in the included files. 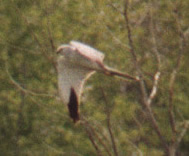 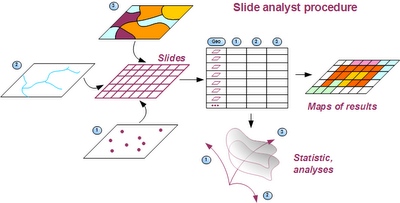 How Kriging works.
Kriging is an advanced geostatistical procedure that generates an estimated surface from a scattered set of points with z values. Unlike the other interpolation methods, Kriging involves an interactive investigation of the spatial behavior of the phenomenon represented by the z values before the user selects the best estimation method for generating the output surface.

Output group.
The Variogram method dialog box has several models to choose from. When the Kriging method is set to Ordinary, the available models are Spherical, Circular, Exponential, Gaussian, and Linear. When the Kriging method is set to Universal, the available models are Linear with linear drift and Linear with quadratic drift. The Universal Kriging types assume that there is a structural component present and that the local trend varies from one location to another.
The advanced parameters allow control of the variogram used for Kriging. A default value for Lag size is initially set to the default Output cell size. For Major range, Partial sill, and Nugget, a default value will be calculated internally if nothing is specified.
The optional output variance of prediction raster contains the kriging variance at each output raster cell. Assuming the kriging errors are normally distributed, there is a 95.5 percent probability that the actual z-value at the cell is the predicted raster value, plus or minus two times the square root of the value in the prediction raster.
Low values within the output variance of prediction raster indicate a high degree of confidence in the predicted value. High values may indicate a need for more data points.

Tools for make of the interpolations lines.

Tools for make of the 3D interpolations lines.

Tools to generation of feature classes by direction.

Tools for make of triangle polygon layer by points.

Interpolation by mesh (Pro only)

Create isolines on surfaces, sections and other triangles mesh. 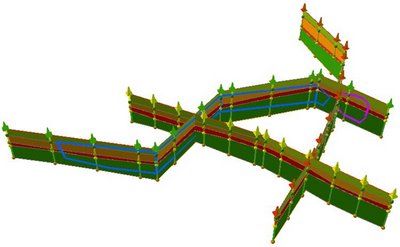 New home page of Slice3D.
Slice 3D is the ArcGIS extension intended for making of information geological-geophysical model of a rock mass. This solution include unique support of "two-scale" geological graphics. We recommend to use tools together with a free Typeconvert extension. Also we recommend to use module KMLer as an extension for support universal Google 4D Z-service. Slice3D include free and commercial functions.
на 14:46 No comments: New version of Superoverlay.1.4.2
Superoverlay Plus. Added feature Superoverlay selections. Example
Selections by area of interests (AOI). You can add Points, Lines, Polygons to selections.
How to use Selections?
Results we see as hi-resolution images near AOI